Get me outta here!

MOOC stands for Massive Open Online Course. I registered to many of them through www.coursera.org out of curiosity and for cultural enrichment. Don’t be fooled by the generosity (courses are ‘mostly’ free) and  the ‘benevolence’ and support of the educational teams: they are quite demanding in terms of reading and activity completion; i.e. time consuming .

The one on Rhetorical Composing, is of particular interest to me as a new venue for expression and writing improvement, with the addition of audio and video and other multimedia possibilities for the 21 century writer/communicator.

When I got to know ‘the getting to know you'( optional) assignment,  I felt like a 4th grader having to write for her first composition class about her holidays: boring. 1st impressions can be really deadly, but I knew better.

Was I going to write my 800 words piece ab ovo a la Tristram Shandy (Yeah right) or in medias res? It’s always in medias res for me. I just let images pop out of my memory as a writer and chose the earliest one: the picture that was never taken on camera or video. Little did I know that the ‘getting to know you’ would turn out to be a getting to know me and have fun with it. So here’s  my 1st contribution below.

I love riddles. Do you know this riddle for kids: “ I start with the letter T, even though I am sheltered, I am always wet. Who am I?”

With My Tongue in My Cheek

I’ve always had a love and hate affair with my tongue. I’ve always suspected that it was because of an accident that happened when I was barely 2. I was climbing a fence at nursery, somehow slipped and got hanged by the tongue on a spike protruding on the paling. Ouch!  Half a dozen stiches. Ouch! So the story goes. Indeed, I have very little recollection of what, I can admit now, was a foundational event in my life pertaining to writing and other visceral functions. The only objective evidence of the incident is a fine 2cm scar on my tongue in the shape of the bulging hook of a question mark. Hence, my love of riddles. As for the subjective evidences or stories, they filled in gaps left in my mother’s narratives, seemingly the only conscious witness regarding this event.

This assignment allowed me to take stock once more on my mother’s take on the event.  She is the one who described the hanging; she is the one who used to say that there was a lot of blood, the unembellished words leaving a lot to the imagination. This time, tough, she was even more evasive, almost reticent and on the phone. She always admitted that she wasn’t there when it happened, neither anyone else, considering. Appalling! What the heck were the adults doing, where were the caretakers, for col? What is absolutely certain is that maman was there for the stitches. That’s probably were the blood came in in her story. I was surprised this time by the omission of the gory detail. I pressed her “What about the blood?” She only said, as if consoling a child who had only skinned her knee: “didn’t I tell you about what happened to Annie G. with the hand blender still in the socket while tasting potato puree?” Obviously, she wasn’t trying to spare my sensitivities, but through her answer, while watering down the event by comparing it to Annie’s, I could feel she was trying to come to terms with my trauma of 40 years ago, by proxy so to speak, and any guilty feelings she was still harboring by giving me away to these irresponsible caretakers.

I used to be ashamed of my scar and tried to shelter it as best as I could behind my teeth, but it happened one day that it came to the attention of a school friend and I felt compelled to quench her curiosity. Her astonishment, her slight repulsion slowly overcome by pity — that my pride and dignity would not, effusively not, take for the life of me — all the rainbow of human emotions at my story and the ones that followed, awakened me to the power of the tongue.  If I was quiet and slightly dumb before, I became outspoken, loud and a bit blunt. I did not wait for people to notice the scar.  Every time someone was showing a scar I made sure, though casually, that mine outbid theirs. I volunteered to tell my story of courage and resilience in the face of adversity of which, of course, I had zero memory. I exhibited the scar, like the officer’s gash, an opponent’s fencing saber, the accomplice, had engraved on his face to make his fierce reputation precede him. I did not fear the ridicule then.

It must be emphasized that my scar never left any speech impediment excepting my being an unshutupable chatterbox.  I got a kick out of exaggerating how the scar originated by, offhandedly, adding a believable detail or 2: I was hanged by the tongue, my feet barely touching the floor; my tongue got impaled by a barbed wire; I got 10 stitches,  my body language supplementing my lack of vocabulary. If   piercing were a trend then, I would have probably said “If you think that you know what piercing is about, look at this!” hanging out the obscene scar for display.  Though I enjoyed telling stories for effect and showing off how articulate I was (in French), I was gradually falling into disgrace because of my tongue. My being outspoken was taken for irreverence by my teachers and the more conformist among my peers, though I felt I was only learning to cut my teeth on my own. I had to give my tongue a rest and become more inspoken. That’s how, at adolescence, writing became a natural outgrowth of storytelling, even before the demon of reading swept me off my feet. That came later. The hyperbole of my ‘debuts’ quieting, gave more room to some inner life to develop, with insight to be expressed for effect only to the extent that it was true to feeling and experience. With reading increasing, I could go on exploring more sophisticated riddles, like the riddle of the Sphinx, the enigma of the human condition, and the price Oedipus paid to solve it. 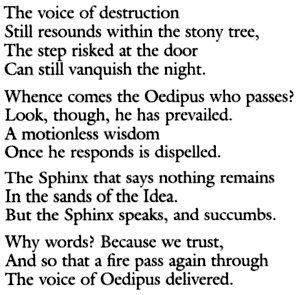 2 caveats, though, in this type of e-learning: you cannot expect to read everyone or be read by everyone, it stands to reason. The rhetorical composing mooc counts more than 28000 participants ! I experienced vertigo at reading massively and giving genuine feedback, though modestly, and I have the feeling that it’s more chance ( text engulfed in an ocean of texts) that brings me readers rather than the pro-active giving of feedback or engaging in conversations . It’s only the first week, let’s see how it develops.

Nonetheless, by activating a happy heuristics attitude, you might make the just right encounter(s) for you  in the form of an accountability ‘tribe’ or support writing group. That’s one of the big deals with Moocs.

I am looking forward to networking, maybe forming writing”elective affinities” . Who knows?

Are you ready to be mooc’d?